I’ll preface this by saying I always appreciate any research funds I can get from the Australian taxpayer via government grants. This  was initially intended less a typical ‘not enough money’, although I’d always like to see more especially if we aspire to be an ‘agile innovative’ economy, and more a ‘here’s the trend I see and what the outcome will be.’

A recent task, amongst many others, has been locking down what’s possible budget-wise for the ARC funding I was very fortunate enough to receive last year. Conventional wisdom in the early 00’s was: DP = 3 year postdoc + healthy operating funds. In the late 00s and early 10s, this became: DP =  2 year postdoc + healthy operating funds. So I was rather stunned last night to find out that in the late 10s, it now means: DP = 2 year postdoc + in debt to tune of at least $10k by the end of year 2, i.e., year 2 has zero opex budget!

Let me explain more. The DP in question has a budget of $100k + $100k + $100k, the usual roughly equal split the ARC system tends to produce. There’s a minimum level you can fund a postdoc (at most places it’s lv A6) and in real terms it amounts to $110k in 2017 and $115k by 2019. A $100k budget for year 2 clearly doesn’t work, unless you want to make someone already on a short-term contract living in an expensive city take a 3 month unpaid holiday in the middle of the 2 year contract if they want to actually be able to do science (an annual cleanroom budget for a postdoc is $5-10k alone, forget all the other opex you definitely can’t do science on $600 opex budget!).

For many, the first response would be ‘but wait, you hire them halfway into the first year, so roll some of the 1st year cash forward and it’ll be ok’. OK, that worked about 3 years ago, but I’ll let you model this yourself, it doesn’t work now. You need them to start in Oct or Nov of yr 1 for that trick to play out in the black, soon it’ll be Dec 31. So what do we do? Sit on our hands for a year before we can hire? Come down to 1 year postdoc contracts, which only hurts mobility of scientists even more? Before I go down this road, let me show you some more numbers.

First, let’s look at historical trends. I’ve been in the ARC system since 2003 so that’s as far back as I can go for now (it’s enough). In Figure 1 below I plot three things. First, in black, is the *actual* annual average award amount for ARC grants (this is not request, it’s award — an interesting addition later might be a plot of request-to-award ratio, although we all know how that one plays out). Taking the average is fair I think as normally the annual real award amounts are roughly balanced. There are two data points for 2017 as I’m a very lucky person this year (one’s mine, one’s an external I’m co-CI on), but it gives some idea of spread. Second, in blue, is the full cost of a base level postdoc in the corresponding year. Third, in red, is the APA stipend, which is there for comparison and to illustrate a side issue.

Two trends are evident. First, the annual post-doc cost is rising much faster than the typical ARC award amount. The second is that the APA stipend is stagnant in comparison to the postdoc salary cost. To highlight this, I’ve made Figure 2 below, which shows the postdoc:student cost ratio. This is cost, those wanting to convert to salary should remove about 20% (the on-cost or ocs) from the postdoc cost to get the pre-tax salary. 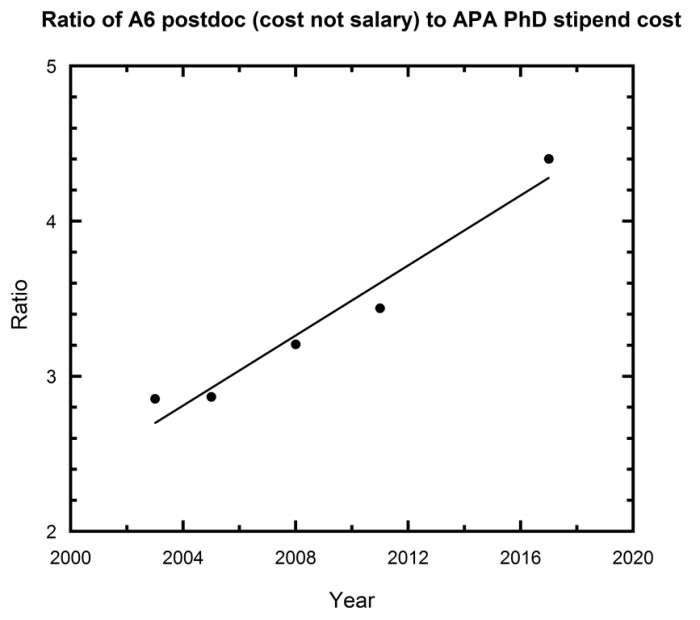 The cause of the trend above is that the postdoc salary falls under university enterprise bargaining requirements, so it advances at approximately 2-3% p.a. depending on your campus. The APA is not, so it’s increase is almost negligible, especially compared to the cost of living in any Australian capital city. Often, we top them up with money that comes from ARC grants, but even this is small, and getting ever harder to fund.

The looming extinction of the Australian postdoc: So let’s come back to postdocs. I have a DP at $100k p.a. level. I now cannot hire a postdoc unless my university is willing to bankroll me (and every other DP holder) to $10k+ level of debt in Year 2, and even then, it makes the opex for the whole project so marginal as to not make sense. In many cases now, a successful DP needs more than one CI on more than one campus (both of mine for 2017), so the opex costs are much higher relative to award amount. We all know a 1 year postdoc is useless, both for them and for us, so what’s the solution? The solution is a) hire half a postdoc by sharing them across two DPs or b) just hire students instead as they’re cheaper by a factor of >4.

Let’s consider a). If I’m one of the few lucky enough to have two DPs I have complete control over, I can hire a 2 yr postdoc and have them do 2.5 days on one and 2.5 days on the other. If the projects are suitably aligned, this works ok for the postdoc, perhaps they get some papers out and find a next job. This is a rare situation these days. If I don’t, then my only option is to hire them 2 or 3 days on mine, and find another group who wants them for 2 or 3 days a week. I did this on the last year of a postdoc on my 2011 DP — the cash was running out, so I stretched them to their next job with 4 days on and 1 day in another group. What was the net result? They worked FTE equiv of 6 days a week trying to keep up with the demands (and that was with two bosses who have serious commitment to staff being good with work-life balance). Now imagine trying to be shared by two monsters who think postdocs should work 24/7 — Yep, bloody scary stuff.

The alternative is no post-doc at all. So let’s sum it up, as politicians love to do, in terms of job, job and jobs. Formerly, you could rely on each ARC DP meaning one job as a post-doc, but now, with the intersection in Fig. 1, you can only rely on at best 1/2 or perhaps 0 per DP — effectively the number of available postdocs per ARC project funded in Aus. should halve in the next 3-5 years accordingly. Jobs are vanishing. I’m the first case of this I can think of — I went from last month thinking of hiring two 2-year postdocs, and now I’m pretty sure I can only hire one, split over two projects. Multiply that across the community, and watch what happens.

Ph.D. students as slave labour with no future: What’s been long happening here is people don’t hire postdocs, they hire students. As a former acting deputy pro vice chancellor of mine used to wax lyrical, ‘ask for a postdoc and just hire 3 students instead’. Hey, now in 2017, according to Fig. 2, you can get 4.5 for a postdoc salary! Bargain!!

I’ve talked on twitter before how shitty the deal Ph.D. students in Australia get, and here’s yet another good example. Not only are they paid a pittance compared to what a real scientist gets paid, but their next step in the system is rapidly being obliterated by the fact that ARC annual award amounts are not even remotely tracking real salary growth (or opex cost growth or anything else for that matter — and that’s ignoring the influx of Profs into the Aussie system by universities aggressively hiring to improve international rankings).

I’ve spent a lot of time in Sweden in past 8 years, and if I talk to Danish or Swedish colleagues, they have the opposite problem. If possible they tend to hire postdocs over Ph.D. students because a) the costs are not that disparate, and as a consequence, b) why not get more experience if it doesn’t cost so much more. The ratio of postdocs to Ph.D. students in that system is pretty healthy. Ph.D. students in Scandinavia don’t make as much as postdocs, the similar cost is that the tuition becomes an on-cost rather than a hidden, as happens in the ‘tuition free scholarship’ system popular in Australia (don’t get me started on this exploitation-enabler, I’ll save it for a separate blog post). In Scandinavia, Ph.D. students are on contracts, they earn a sensible amount, they have proper rights afforded employees, such as paid parental leave. They can afford to get married, have kids, go out, rather than eat microwave noodles and live in their parent’s basement.

Taking my research group leader hat off for a second, if there was ever a time for Aussie Ph.D. students to collectivise and negotiate for a better deal it’s now. When I was on an APA in 1997-2000 it was $17k p.a. and I could afford my own apartment 2 blocks back from Bondi beach (albeit small but hey…), now in 2017 it’s only $26k and you have to live with your parents or share a bunk in a room in an apartment (ok, slightly melodramatic perhaps, or perhaps not, but you get the gist).

When the above happens, the system is gonna collapse spectacularly, but maybe we need that. Because at the moment, that black line in Fig. 1 shows Australian science as a patient with a gunshot wound slowly bleeding out. There’s only so much blood that can be spread so thinly between labour, operating budget, etc, all of which (except Ph.D. costs) are increasing at 3%+ p.a. whilst award amount is almost stagnant. Yet, if the success rate falls to increase award amount, the exact same outcome occurs in a slightly different way. So, as I see it, at 2017 in Aussie science, we’ve got shutdown on many minor organs, unconsciousness and a weak pulse. Death is not far away (about 5 yrs is my guess) unless we can do something about the amount of Cat 1 budget allocated by Government to keeping the system alive. Sure, I can see bandaids, but unfortunately, bandaids don’t fix bullet holes.